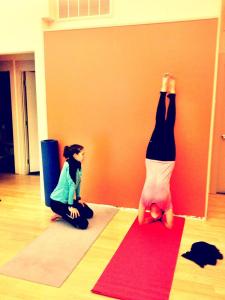 Demoing pincha mayurasana after a long run with running coach, Milly, at Sherpa in CT.

Ever since I started doing triathlons in 2010, I’ve been fairly consistent in following my long runs (and rides) with a short 10-20 minute yoga practice. These practices typically involve basic poses that get into the psoas, hamstrings, quads, hips, IT band … the usual.

It wasn’t until I was with the Sherpa group out in CT this weekend when I was inspired by the contagious energy of one of the Sherpa run coaches, Milly, to demo and teach forearm stand (she wanted an inversion, but one that did not put pressure on the top of her head like in headstand.)

We first tried L-pose (handstand modification) and then, pincha mayurasana. Milly is a rock star runner and a wonderful yogini because she was willing to jump right in and try the pose. AND, with attention to her form and a little assistance on my part, she got right into it. I wish I could remember exactly what Milly said once she got up, but I can assure you that a) it made me laugh out loud and b) it was a major “Ah-ha” moment.

So, time willing, I will start doing some post-long run pincha – with Milly’s fearlessness in mind!

It’s fun! There is something to be said about a pose that makes you feel like a kid again. Pincha definitely forces me to focus but it also makes me smile, laugh, and feel powerful. Not only do your legs get a break, but you reverse the flow of blood so the heart gets a “rest.”

Click here to read more about pincha (including modifications and prep steps.)

This site uses Akismet to reduce spam. Learn how your comment data is processed.